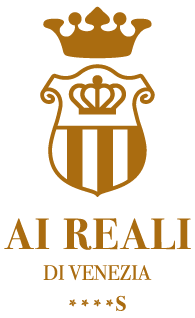 Opened in 2013, the 4-star Luxury rated “Ai Reali” Hotel is located in an ancient aristocratic Venetian palace, in the historical center of the city, between Rialto and Piazza San Marco. The Hotel, that also hosts the “Alle Corone” Restaurant, the lounge bar, the “Reali Wellness & Spa” wellness center and a conference center, stands out for its highly refined elegance and for the attention of its staff to the slightest detail, wishing its guests to feel like they have a second house in Venice.

“Ai Reali” Hotel was born following renovation of an ancient aristocratic Venetian palace of the 17th century, “Cà Corner-Reali”. Owned by a branch of the Corner family, it was first purchased from Mr Algarotti, and then by Mr Guzzetti. To his turn, the latter sold it in 1800 to Mr Reali who, at that time, owned several wax factories and one of the oldest sugar refinery plants. Palazzo Gussoni, which dates back to 1500 and was supposedly designed by Pietro Lombardo, is located on one of the hotel wings.